Call Us For Free Consultation

Which auto makes get in the most fatal accidents? (2018 Case Study)

Click here for rankings table, here for interactive maps, and here for our methodology

Each year in America there are an average of six million car accidents causing three million injuries and over 37,000 deaths.

So, why isn’t safety a top priority for car buyers???

For several years now, safety hasn’t even been one of the top five reasons people cite for choosing a car in the J.D. Power annual studies.

The crash tests clearly illustrate: not all vehicles are created equally safe.

A vehicle’s ability to keep you safe is a top priority to us here at AutoInsurance.org, which is why our researchers perform an annual study to determine which ten vehicles are involved in the most fatal crashes.

10 Vehicles Involved in the Most Deadly Crashes 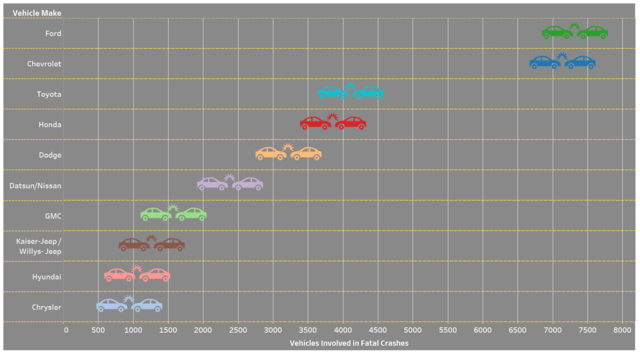 Is the vehicle you drive every day likely to get in a deadly automobile accident? Read on to find out!

Chrysler may be a “Car That Made America,” but is it a car that keeps America safe?

946 Chryslers were involved in U.S. traffic accidents resulting in deaths in just one year, 2016.

For over 14 years now, Chrysler hasn’t had the best reputation for keeping its passengers safe in a crash. In 2004, the PT Cruiser got bad press when three out of four of its passengers died in a T-bone crash.

Four years later the PT Cruiser’s crash ratings weren’t any better as you can see in the above video, which fortunately only involves dummies.

Seems like safety needs to be even more important since in 2016 there were 1,058 Hyundais involved in fatal car crashes in America.

Plus in a 2015 study, the IIHS ranked the Hyundai Accent third for having the highest death rate of all the reported vehicle models and sizes.

Over 70 years later, Jeeps are still a U.S. favorite. Check Auto Insurance for Your Jeep.

There were 1.4 million Jeep SUVs sold globally in 2016, and two-thirds of all those sales were to buyers living in North America.

Unfortunately, the number of Jeeps involved in fatal crashes is also impressively high—1,268.

The state with the most Jeep deaths must be aware of the fatal trend since Texas Recreational Safety & Land Management chose to share the above graphic warning video.

Jessica Alba is a proud owner of one, and they have one of the best commercials ever made by a car manufacturer:

But this “professional grade” vehicle is finding itself at the wrong end of far too many deadly accidents—1,575 in the U.S. in 2016!

Every single state and even D.C. had at least two fatal car accidents involving a GMC in 2016, and California and Texas had over 300 combined in those 365 days.

It seems the word is spreading since two GMC vehicles, the Safari and the Sierra, made top three in a 2016 publication, The Most Dangerous Cars in America.

Since its start in 1914, Nissan has had some incredible accomplishments.

Not only did Nissan make the world’s first limousine in 1967, but it was used for driving around the Emperor of Japan! And the Nissan Cedric was given the prestigious honor of transporting the Olympic torch from Greece to Japan in 1964.

However, the 2,389 U.S. traffic deaths involving a Nissan in 2016 are casting a shadow on those early glory days.

At least the Nissans sold in America are faring better than those sold in Mexico as shown in the above crash test.

“Like Chrysler, most Dodge products have below-average reliability, with the Grand Caravan the only Dodge vehicle to score average.” Consumer Reports, 2018

This “below-average reliability” meant 3,220 fatal traffic accidents all involving a Dodge in 2016 on U.S. soil.

Dodge now puts a special focus on its high-performance cars, but as you can see below the “performance” focus isn’t on safety.

Before you choose your next vehicle, keep in mind that Dodge Challenger crash test and the fact that your leg can’t get screwed back together.

Safety isn’t the only thing people sacrifice when they drive sports cars like the Challenger and Charger. These muscle cars cost significantly more on the lot, in repairs, for regular maintenance, and in required insurance coverage.

Read on to find out what is considered a sports car by insurance companies.

A top five vehicle manufacturer in the world, Honda runs on “The Power of Dreams.”

But sadly, 3,858 Hondas were carrying passengers when their dreams were shattered on U.S. roads in 2016 deadly car crashes.

An American favorite, the Accord, has made Honda over $300,000 in U.S. sales alone for over 30 consecutive years.

It’s fitting that “Accord” means “to heart” because Honda needs to take these thousands of unnecessary traffic deaths to heart and help minimize them.

Toyota has come a long way since its start in the 1930s.

Did you know? 13 years before Toyota manufactured vehicles, its specialty was sewing machines.

Not only do cars make Toyota millions more, they cause a lot more damage than their tabletop machines.

Interestingly Don McLeon chose a Chevy to be the car he drove the day that he (and music) died in his famous song, American Pie.

But when the 7,142 Chevrolets crashed on U.S. roads in 2016, death was much more than just a metaphor in a catchy song.

Lives were forever lost in each of those Chevy traffic accidents.

Considering the alarming number of recent recalls, defects, and deaths involving its vehicles, Chevrolet needs to put a serious focus on improving safety and saving lives.

Being the world’s largest family-owned business and the first company to make and sell cars, Ford is a trusted, family favorite in the United States.

Did you know? The first Ford only cost $850. And thanks to the assembly line, that priced dropped to under $300 17 years later.

Unfortunately for today’s drivers, the 21st century is a time of much more expensive cars that kill hundreds of thousands of people each year.

In 2016 alone there were 7,322 Fords involved in fatal traffic accidents on U.S. roads. Each of those accidents represents at least one person killed.

It’s a serious problem when all 50 states (plus D.C.) have at least four fatal car crashes involving the same vehicle. Among the 51 areas in our study, there was an average of 144 Ford crashes each costing one or more lives in 2016.

More people mean more cars, and more cars mean more crashes. But, this study proves that the fatal crash trends in our country aren’t always consistent with the population totals.

States & Vehicles with the Most Fatal Crashes:

Even though California had over 11 million more residents, Texas still had over 200 more fatal traffic accidents in 2016.

What’s also alarming is that half of the vehicles on this list had their highest number of deadly crashes all occurring on Texas public roads.

States with the Least Fatal Crashes of our Top 10 Vehicles:

Above data from NHTSA and U.S. Census Bureau reports for 2016

Even with over 1.4 million residents in 2016, Hawaii only had two GMCs involved in deadly car accidents while Texas had 187.

It’s not always the least populated area that have the smallest number of deadly car crashes.

No amount of studies on fatal crash data can make them go away.

An average of 3,287 people are dying in car crashes every day around the world, and these 100 percent preventable events are the leading cause of death for people aged 15 to 29.

To help you stay safe on the road, here are 10 Tips to Avoid an Accident from Geico.

But if you are like one of the six million Americans that find themselves involved in a car crash, here are 7 Easy Steps to follow from Esurance.

This study is based on the most up-to-date, reliable fatal crash data, NHTSA’s Fatality Analysis Reporting System for 2016.

In order to complete this ranking, we needed to first answer the following complicated questions:

All of those questions were answered and organized by our researchers.

– To sort the table by category, click on header columns.